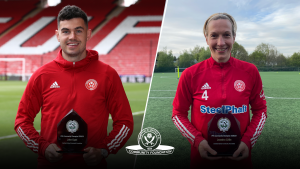 Sheffield United’s John Egan and Leandra Little have been named as Professional Footballers’ Association Community Champions for 2020/21, celebrating their dedication to supporting others.

The centre defenders were nominated for the awards after getting involved with Sheffield United Community Foundation activities throughout the pandemic over the last year. The pair have been involved with Q&A sessions and appeared in videos tackling important issues such as mental health.

The PFA Community Champion awards aim to recognise players dedicated to getting involved in the communities around them and lending a hand to their club’s charity work throughout the season.

On receiving the award for the second time running, John said:  “We may not have had the success we would have wanted on the pitch this season, but an area where this club is top of the league is its work with fans and community groups and I’m delighted to be involved. The award is great recognition but I’m just happy to give something back to the people of Sheffield and support the excellent work that the Community Foundation carry out every single day.”

Sheffield United Women’s Captain, Leandra Little said:  “I’m grateful to have received this award. However, I see this as part of my role as a player of Sheffield United football club. I’ll always aim to contribute in any way I can to make a positive difference for those in our community. I aspire to help and support by using the platform I have to be a role model and make a positive impact.”

Sheffield United Community Foundation would like to thank John and Leandra for all of the work that they have done for the Sheffield community over what has been a difficult year for all of us.