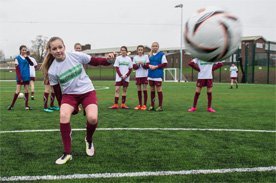 Representatives from the Sheffield united Community Foundation attended an event at the House of Commons on Wednesday 9th March 2016, hosted by Ferrero and the Football League Trust, to celebrate the success of the + Sport Move and Learn Project.

Launched in 2013 by the Football League Trust and Ferrero, it is a national school-based education programme for children aged 9-10 with content developed by nutrition, education and sporting experts in line with the Government’s Eatwell plate and National Curriculum for PSHE and Science. Over 6 consecutive weeks children spend 9 hours both inside and outside the classroom, learning about the importance of a balanced diet and active lifestyle and participating in a range of sports including football, dodgeball and handball.

At the event we heard from a number of speakers including Stephen Pound MP, Ferrero UK and Ireland CEO Pieraldo Oldano, Football League Trust Operations Director Mike Evans and Hiedi Sloan from Sky Blues in the Community, who all spoke about the successes and development of the + Sport Move and Learn Project. Guests also heard from Olympic Gold medallist Sally Gunnell who spoke about the launch of a new report which accesses the barriers to increasing children’s activity levels. The report is launching over the next month.

The Sheffield United Community Foundation are delighted to be involved in the programme over the past two years and are proud to have delivered to over 3,500 children across 70 primary schools visits in Sheffield by the end of this academic year.