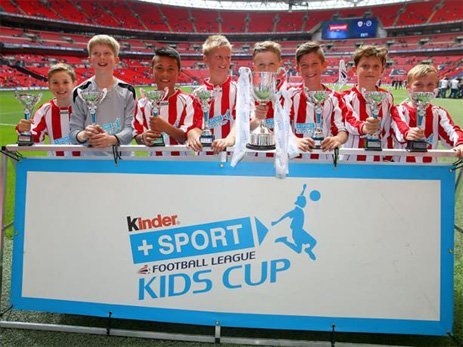 Children from Norton Free Church of England Primary School lived the dream of thousands of people across the world – by winning a cup final on the hallowed turf of Wembley Stadium. The school’s U13 team had won through a number of qualifying rounds to represent Sheffield United in the grand final of the Football League 1 Kinder+Sport Kids Cup Grand Final. In the final they met Eye Church of England Primary School, representing Peterborough United, and following a dominant display ran out 1-0 victors to bring the cup back to Sheffield!

Although the Norton players saw a lot of the ball in the first half they were unable to take their chances, with Ben Kemp, Danny Church and Bradley Taylor all going close. Despite this possession Ben Gaskell, Norton’s goalkeeper, had to be alert on a couple of occasions to clear the danger as Peterborough countered. The winning goal came in the 2nd half when a throw from Frankie Hirst found Danny Church, who passed it onto Mackenzie Maltby who struck a first time  shot from 20 yards into the top right corner. It was a goal worthy of winning any game at any level and the full time whistle brought amazing celebrations amongst the Norton Free players..

With friends and families watching on in delight, the team lifted the trophy aloft in the Royal Box after making the famous walk up the 107 Wembley steps. It was a truly unforgettable, once in a lifetime moment that will live with the players for the rest of their lives.

Match winner Mackenzie Maltby said “It’s my dream come true to score a winner at Wembley. I did fancy my chances from long range but not on my left foot, so I was a bit surprised to see it fly in! It’s been a great tournament which gives a lot of kids like us the chance to show what they can do”

David Smith, teacher and the school team’s coach, added: “It’s been absolutely amazing. The boys have been fantastic throughout the tournament and have done the school, Sheffield United and themselves proud.”

Of the team’s success Rob Jenkinson, the Foundation’s Competition Coordinator who accompanied the boys at Wembley, commented “what the boys have achieved is nothing short of incredible. They are deserved winners of this competition and their hard work and team spirit has been exemplary. We are all very proud of them.”

The Football League Kids Cup, alongside the Girls Cup for under-13s, is sponsored by Ferrero’s Kinder+Sport programme which encourages children to be physically active and embrace the joy of moving both in the UK and globally. The Kinder+Sport programme is designed to promote active lifestyles through dynamic play and sports among children and their families, and has reached 15 million children in 27 countries to date.

These competitions encourage children to get involved with sport and physical activity, whilst giving them a unique opportunity to play at football stadiums. In the academic year 2015/16, Kinder+Sport together with The Football League Trust will reach more than 47,000 children here in the UK.

Finally, a massive congratulations to Norton Free on their cup final success!